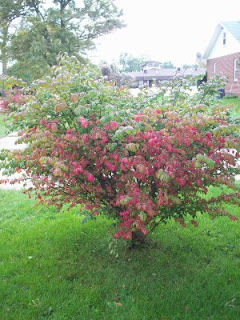 My burning bush is starting to turn red, which means Fall is officially here. And it actually finally feels like it! For the last week, the nights have been hovering around 40 degrees, while the days are only hitting the 60s and low 70s. (We had been hitting 80s the week before.) Weather-wise, it's been a strange year. Spring was wet. So wet that the crops got out extremely late. It got so late for corn, in fact, that many farmers put out soy beans instead. But after the rain finally let up and the farmers finally got their crops out, we had almost a perfect summer for them. The weather was warm without being unbearable--in fact, down right cool at times, and it rained just enough. We have been in "drought" and "near drought" for so many years, this summer's rains refilled the lakes and the reservoirs. This is an agricultural community. If the crops have low yields, the whole community suffers. So talking about the weather isn't just making small-talk, which I've always found amusing! The down side of it for me was that we hardly got to swim in our pool all summer! It rarely got warm enough for the water to get comfortable. The summers for the last few years have been almost unbearably hot. There doesn't seem to be any pattern anymore. Makes me wonder what is going to happen the next few years.
Posted by Sadie J at 10:06 AM No comments: 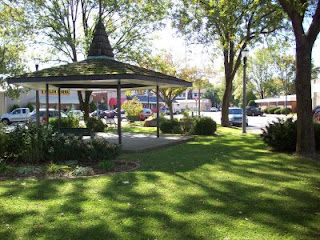 Ever since I was little and realized most towns had a town square, I've loved the fact that my town had a triangle! The layout of the town centered around two railroad tracks that crossed each other, but didn't dissect each other at a square. I've heard they are planning on tearing down the present gazebo and building a new one. The Triangle really is an integral part of our town. I don't believe the space is used as much as it could be, but it's not uncommon on a Saturday in the summer for there to be a bake sale or pork burger sale that draws large crowds. The Halloween parade and the Abate motorcycle parade both circle around the Triangle. I've heard in "the olden days" there used to be bands that would play on Friday nights. After the original building blew apart in a storm, walls would be put up around the gazebo in the winter to serve as "Santa's Cottage". I wish I had taken pictures a month ago. The Garden Club has been planting and caring for flowers on The Triangle for several years, and this year was especially colorful.
Posted by Sadie J at 12:24 PM No comments: 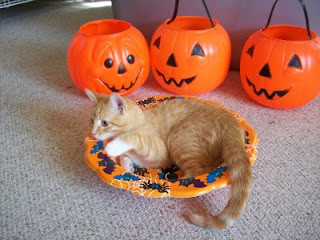 I had every intention of getting some cleaning done and putting out the Halloween decorations yesterday. Typical Sunday--I got some of the cleaning done and a few decorations up. There are just too many distractions! One being Rosco. We've had him for eight weeks now. We found him at the reservoir. Probably someone had dumped him. We couldn't leave him there, so we brought him home. I really didn't intend to keep him, but he stuck and he's definitely made himself a part of the family!
Posted by Sadie J at 1:02 PM No comments: 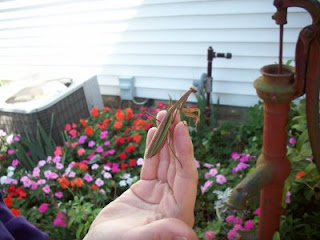 I love flowers, and I seem to have a thing for Praying Mantises. I think it goes back to when I was a kid and Mom found an egg case and stuck it by the door. When they hatched we had babies all over the place and I've been a fan ever since! Last summer when we were working on my son's bug collection for school I caught a large momma and brought it home. (She didn't make it into the collection!) Now we have several larger specimens in the yard. Even tho I try to go light on pesticides, we haven't seen many mantises this year, but the warm weather must have brought them out of hiding because we found quite a few today. This one made it to the top of the pump. Don't know where she thought she was going from there! I'm just really hoping they are all busy laying eggs this afternoon!
Posted by Sadie J at 3:54 PM No comments:

This has been the longest week. I didn't think Friday was ever going to get here. I'm not sure why it seemed so long. Maybe because I expected it to be busier. Usually the first few days of the month are fairly busy just because people get their food stamps and come in and stock up. Our store has exceptionally good meat, and people come from quite-a-ways. The first week usually sees a big surge in meat bundles. But for some reason that didn't happen. I get alittle tired of hearing about the economy (which is a huge topic in a grocery store!) but I imagine it has everything to do with the economy. My guess is that the people with food stamps went to Aldi's and Walmart to try and stretch their bucks, altho one friend went over and said they didn't seem any busier than normal. It's a mystery!
Posted by Sadie J at 6:37 PM No comments: