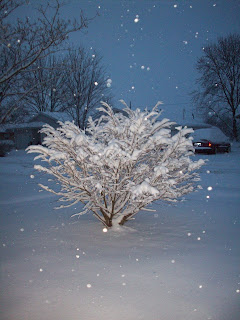 In the Fall I split some persimmons and they showed spoons, which, according to local lore, means lots of snow. Well, there has been a good amount of snow across the country over the Winter, and we, ourselves, have had quite a few days with snow, but we've had very little accumulation. Until now. When we're all ready for Spring. The seeds didn't say where or when so I guess I'm going to say the seeds predicted right. From now on, I will trust the seeds over the groundhogs!
Posted by Sadie J at 1:12 PM 1 comment:

Last year at this time we were having record highs and the flowers were blooming. Today it barely got above freezing and there is talk of snow (with possible accumulation) for the weekend. I'm so cold! And tired. It takes me half of the Summer to adjust to the time change. If it wasn't still light out, I would go snuggle up with my comforter and go to bed. I might, anyway!
Posted by Sadie J at 6:32 PM 2 comments:

My 49th Birthday was Monday and one of my High School BFFs invited me out to her house after I got off work for a couple of "Birthday shots!". Life is so busy that we don't get to spend much time together. Especially time that includes alcohol! I only meant to stay for an hour or so, but it ended up being about 3 hours of gossiping and laughing.  So much fun! The husband isn't much of a socializer, but I really think I'm going to make an effort to get out more and reconnect with my old friends. 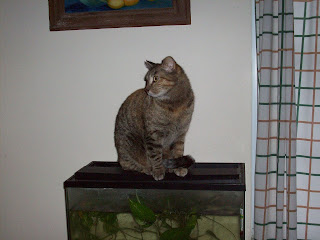 I don't know what it is about the aquarium, but the cats all like to sit on it. I keep expecting it to tip over, but so far it's stayed steady! 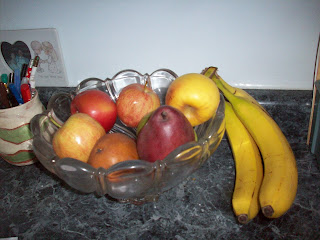 I like fruit. But I don't eat it. I buy it with every intention to eat it, but somehow I forget it's there. Sitting on the counter. In plain site! The son eats a banana and an apple almost every day, so it doesn't often go to waste. Maybe I'll go eat one of those pears I bought right now, while I'm thinking about it! (oh, and how I'm dreading the time change. why can't we stop daylight savings time. i just got used to the last time change.)
Posted by Sadie J at 6:00 AM 1 comment: 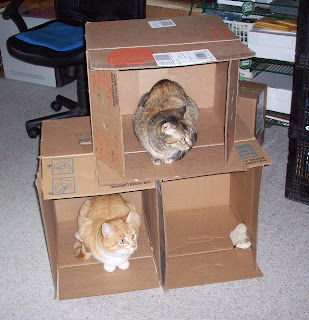 I had planned on using these boxes for the recycling, but instead they became a cat tower--literally. While I was at work, the husband cut holes in them for the cats to crawl through and taped them together. Now the cats ignore them!
Posted by Sadie J at 6:37 AM 2 comments: 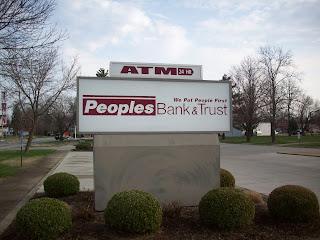 Tuesday afternoon a young couple from Missouri robbed one of our local banks. That's not the story I'm going to tell, though. The story I'm telling is how amazed I am at how so many people go through life uninformed on things I consider basic, maybe even important  knowledge. Tuesday is our Senior Citizen day plus this week there was talk of bad weather coming in, resulting in a very busy afternoon. The robbery happened around 2 o'clock and the grade school, at the other end of the block, was put on lockdown. Hoards of people starting coming in- possibly because of the reasons I just listed or maybe just to hear the gossip. At one time we had lines of people at our two registers. The discussion became "I sure hope they didn't steal my money" which was all funny and people were laughing. Then I realized a few of them were serious. They really were afraid their own, personal money had been stolen. I looked at one lady and said, "well, you know, the bank is insured. You won't lose anything". I could physically see relief pass through her body. And I realized, she really didn't know. All those bank commercials with "FDIC insured" meant nothing to her and some of the others standing there, afraid they had just lost their money. I've always considered myself to be of average intelligence,  but lately people have really done their best to make me feel smart!
Posted by Sadie J at 5:34 AM 2 comments: