We all expect those panicked late-night calls from our kids when they are in their teens about car trouble. Even I had to call my folks to come pull me out of the mud two Christmas' ago. Yesterday was my daughter's official moving home day. I knew she would have a lot to finish packing and I knew she was going to have a rough time separating from her roommates, one especially-they've been joined at the hip for more than the last year and a half. But I really thought she would head home by mid-afternoon. The drive between here and Indianapolis, where she has been attending school, is almost three hours long. The fact that she drives a 15 year old Escort has never bothered me much, but for some reason I had a bad feeling this time. Not unfounded, as it turns out. The RA that was supposed to inspect the apartment didn't get there until (very) late afternoon, so by the time she finished packing and got something to eat, it was almost dark. Half way home, just west of Terre Haute, her tire blew out. Thank goodness, she had just gotten to the rest area. She pulled over and called us. While I was "discussing" options with my husband, she was "Mom, I'm all freaked-out here!" I told her to unpack the trunk, get out the spare, and look helpless. Maybe someone would take pity on her. In the mean time, we would head her way. Well, my plan worked. A nice trucker helped her get the tire changed. We had only gone approximately 20 miles when she called so we turned around and headed home, and she finally made it, safe and sound. It's nice to know there are still plenty of good people out there!
Posted by Sadie J at 7:06 PM No comments:

We are heading to Florida to Walt Disney World in two days. We went as a family 4 years ago and it was one of the best times I've ever had. I had promised the kids two years ago that we would go back, and I've been planning this for the last 6 months. For the last month I've had flash-backs of the Haunted Mansion, and I've caught myself the last week or so taking deep breaths as if I am breathing in the Florida air. Anticipation, I guess! We have reservations for 7 nights at the resort, 6 days in the parks. I am so ready to go!
Posted by Sadie J at 8:02 PM No comments: 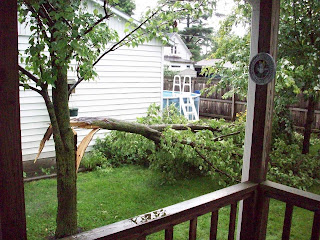 For quite a few years our summers here in Central Illinois were hot and dry. We were actually in severe draught for several years. But for some reason the last few years have been totally opposite. We have had such wet Springs that the farmers have had a rough time getting their crops into the ground. And if you have noticed a canned pumpkin shortage, it's because the ground was so wet last Fall that, altho there was a decent crop, no one could get out to bring them in and they rotted on the ground! This year hasn't been quite as bad as last year, but it took me forever to get my garden planted, and now it's been so wet I haven't been able to hoe. At this point I have more weeds than plants, so there may not be much of a crop this fall. To top it all off, we have had some pretty strong storms move through and the one that passed us on Tuesday had a little tornado action going with it. There is a "mound" outside town that seems to divert actual tornadoes around us, but occasionally we get some damage. This time it was our turn! My poor Bradford Pear took a hit. The gooseberry bush got smashed a bit, but otherwise we were lucky. Our neighbor down the block--not so much. A huge limb fell on his garage and car. I haven't heard how the dog is.
Posted by Sadie J at 7:40 PM No comments:

The Modern Use of the Encyclopedia 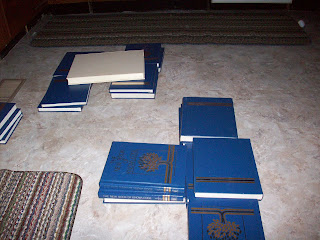 The previous owners of our house had off-white carpet in every room. Every! Room! That's just wrong. Carpet should not be in bathrooms, mudrooms and kitchens, and especially not off-white carpet! We tore up the rugs in the bathrooms several years ago, but we just recently replaced the carpet in the kitchen with linoleum tiles. A little extra glue and the weight of the encyclopedia made sure they are good and flat! I think we have used my encyclopedia to hold things down more often than to look things up!
Posted by Sadie J at 5:09 PM No comments:

The daughter is moving home in two weeks. After almost two years away at school, she is taking a break. She and her roommate have both decided they have gotten all they can from the school they have been attending and are going to look into other options. In the mean time, she is moving back with us. It's going to be an adjustment! I think more so for her than for us because she has spent the last two years in Indianapolis, where there is plenty to do. There just really isn't much to do in our little town. (Maybe that will be her incentive to find a school quickly!) She came home several weeks ago and brought a car load of stuff. We met her in Terre Haute today, which is half way between here and there, and brought home another car load. I was hoping she could get the rest of it home in one more load, but she didn't sound confident that she can do that, so we will probably make another trip next weekend and do it again. I'm just wondering where we are going to store all of her stuff! It's amazing what one can accumulate in 2 years!
Posted by Sadie J at 6:30 PM No comments: 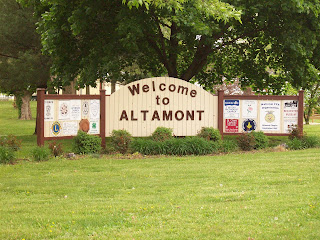 I've spent so much time the last month getting ready for our town's first Homecoming, I haven't had much time to devote to other things, including this! A huge amount of time has gone into Life in Altamont , my blog about my home town, hoping to "reintroduce" people that have been away for a number of years. It's amazing to me how much our little town has changed in the last twenty-five years. When you see it every day, you don't notice it so much. I think I had kind of quit looking. But as I went around and took pictures and talked to people, I was rather amazed! My goal was to do one entry every day in May and it turned into more work than I ever thought it would be--partly because it kept raining and I had a hard time getting pictures! Somehow, I succeeded. Although it won't be a daily thing now, I plan on continuing. Hopefully, I can do one entry a week. There is still so much I missed! Who would have thought there was so much in this little town!
Posted by Sadie J at 8:55 PM No comments: