My world is falling apart right now, by which I mean that I have so much to take care of that I'm becoming paralyzed. The list is so long that I don't know what to do first. This isn't the first time this has happened, and what normally happens is I will do whatever has to be done in the next day or two as each thing comes due, and eventually I should work through it all. It always works out, but this time feels worse for some reason. I think my nerves are so frayed at this point that my mind has quit working. I keep screwing up at work. Not good. I've suffered from depression in the past and a few years back I started having panic attacks so bad I could hardly leave the house. I ended up on medication for a few years. I don't want to end up back there again. I know time takes care of things, but I just don't want to have to wade through it. I would prefer just to pass by it! Do you think if I just ignore it all, it will go away!?
Posted by Sadie J at 7:14 AM 2 comments: 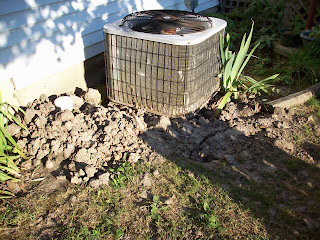 I bought our house at auction 11 years ago. It's a big house, 10 rooms, 3 full bathrooms, nice sized utility room, and a mudroom. Plus a double lot with two garages. It was an older house that had been added onto in 1995. It was a spur of the moment thing, the buying of the house. And right now I can't afford it. The utilities are high, and alot of the remodeling was apparently done by amateurs. We had to have the plumbers come this week to run a snake to the sewer, except there was no clean-out, and they couldn't find where the line left the house. It turned into an all-day thing. $500 and a torn up flower bed later our drains work and we have a clean-out, but I suspect this is only the beginning. Things are probably going to start falling apart. Part of me knows we need to unload it, but the other part of me really likes it here and wants to stay. I've been planting stuff since we first moved in and I don't want to leave my plants! The food producers, like the rhubarb, gooseberries and asparagus, are just now really going strong. If we move, I'll have to start all over! And what if the new owners don't want to mess with it and dig it all up? Oh, the horror! I think it would physically hurt me! Plus, there is my burning bush, butterfly bush, peonies, lilies, iris beds and other miscellaneous plants. I'm hoping the money problem resolves itself soon and I can stay here. In the mean time, I'm just glad I don't have to go to the laundromat any more!
Posted by Sadie J at 7:43 PM No comments: 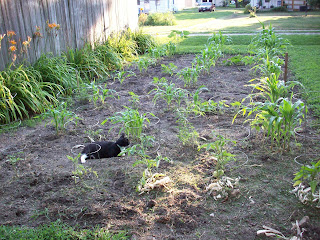 A friend had mentioned "three sisters" on facebook and being curious, I looked it up. Turns out it refers to an Indian method of gardening. Our garden spot is small and in a low spot--not the best location. Last year we had so much standing water I didn't mess with it at all--I just let the sunflowers take over. This year, after I had read about the three sisters, I decided to give it a try. Unfortunately, we again had a wet spring and I began to suspect there would be no garden this summer, either. But I got stubborn. At several different points I was tilling and planting in the rain. And I had to modify what I read to my circumstances. Then it rained and rained some more. The plants started growing, but half the time my garden had standing water. When we got back from vacation, it appeared that there was more weeds than plants. My husband said to just forget it, but again I got stubborn and started hoeing and tilling and found there was more plants than at first believed. A bit yellow, yes, and the tomato plants are a bit scrawny, but my hard work paid off. Everything is turning green and is growing. I've replanted a few things, so fingers crossed, I'll get some beans yet! Even the neighbor's cat, Oreo, likes it!
Posted by Sadie J at 7:27 PM No comments:

Well, the garden just might survive, after all. I guess the rain continued while we were gone, and when we got home after being gone for almost two weeks, there was more weeds than plants. My garden is in a low spot, so after a rain there tends to be standing water, at least on half the spot. But there wasn't any standing water when we got home. Yesterday I took the hoe out and worked around all of the plants and this morning I took the tiller and went down the rows and between the plants. It looks like most of the corn made it, but not many of the beans. I'll have to replant. At least one of the zucchini made it, and some other vining plants--cucumber, pumpkins. The eggplant is a no-show. And the tomatoes are hanging on. Every thing is a bit yellow, which shows they have been in water recently, but hopefully they will green up now--if the heavy rains can stay away!

We have cats. Two outside, two inside. Mom checked on the outdoor cats while we were gone, made sure they had enough food. We boarded the inside cats. And came home to fleas. We've never had trouble with fleas in this house before, but I guess last year was a great year for the critters, and we have fought them all winter long. I thought we had them taken care of, but I guess not. Syd and I both apparently have sweet skin, because we both got bitten immediately. The guys haven't had a single bite. It's so not fair! So we fogged the house yesterday and I'll Frontline everyone again. Uugh!

We went to see Toy Story 3 yesterday (while the foggers were doing their thing). Good movie! (I got teary at the end.) I think Toy Story was the first movie we took the kids to. We saw it in 2-D and I think it was a good call. We saved $8.00 and I don't think we missed anything. I went and saw Avatar three times, and I think the 3-D enhanced that movie, but we've seen the latest Shrek movie and Alice in Wonderland in 3-D and think both movies would have been just as good in 2-D. I'm hoping this whole 3-D thing is a fad.
Posted by Sadie J at 11:04 AM No comments:

The Happiest Place on Earth 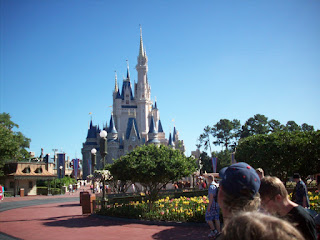 We just got back from Florida. I've been planning this trip for two years, but for various reasons, (both related to my husband's job situations) we weren't able to go. This year I said we were going, no matter what! This was our second time going as a family to Walt Disney World. What can I say--I love it there! We stayed at the All-Star Movie Resort this time--last time was Century Pop. Altho the resorts are similar in most ways, we will stay at Century Pop next time just because there is three All-Star resorts and they share buses. We stayed 7 nights with 6 days of park tickets, plus we went to see Cirque du Soleil. It's expensive, but if you ever get a chance, see the Cirque du Soleil. It is amazing! My 18 year-old son said that was his favorite part this time. He even bought the CD, and he isn't a big music person. I was able to get in on a special WDW was running where we got the Meal Plan for free. The meal plan allows two (express) meals and two snacks a day per person. We took extra snacks with us just because we were afraid that the Meal Plan wouldn't be enough and we would get hungry, but we shouldn't have worried. Last time we went, we took breakfast stuff and sandwich stuff that we ate for lunch, and bought food in the parks for supper. We bought the cheapest stuff we could and shared alot, so I guess that's why we thought the meals and snacks would be a bit small. It was so much food, we didn't even use it all! The morning we left, we went to the food court and loaded up on snacks and sandwiches and salads. We ended up with enough stuff to cover two meals on the drive home! So, yes, I definitely recommend the Meal Plan! The only thing that put a bit of a damper on the trip was the fact that I guess my age is starting to catch up with me. My ankles swelled so bad and that's something new that I didn't expect.
Posted by Sadie J at 6:58 AM No comments: