The husband and I went to the Zoo last month--without kids. It was a nice day and I almost didn't take my camera, but it seems like there is always something that we've never seen before. So I'm glad I did, because I've never seen the Penguins put on a show like they did and the Elephants were doing behaviors I had also never seen. It was so sweet, because the elephant that made the mud hole, instead of pushing the others away, actually went over and rubbed her head on them, like she was hugging them. You hear that they are very affectionate to each other and I believe, with all of the times we have gone, this was the first time I've actually seen it. There is a new baby Rhino I was hoping to see, but apparently it wasn't out yet the day we were there. Hopefully, we will get back soon. The St. Louis Zoo really is one of my favorite places!
Posted by Sadie J at 4:47 PM No comments:

Bird on a Ladder 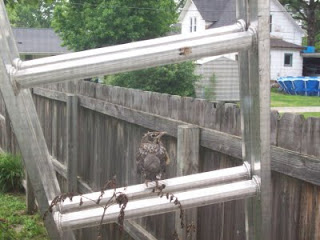 We have several trees in the yard and during the last few weeks, since it's been warm enough to have the windows open, the noise the baby birds have been making has just about driven us crazy! It's amazing how loud they can be! Now, they are all leaving the nests and there are baby birds all over the place. I'm afraid the neighborhood cats have decided our yard is Cat Central and the babies that don't learn to fly quickly are probably short lived. This baby Robin found a perch yesterday evening on the ladder my husband left outside after cleaning gutters. He spent quite awhile there, just looking around, until an adult showed up with a worm. Then he got very excited, started making lots of noise and flapping he little wings around. Last I saw of him, he very wobbly flew over to the fence and, very proud of himself, looked around to see if anyone noticed. I think he is safe from the cats!
Posted by Sadie J at 5:46 AM No comments:

Every Tuesday at the grocery store is Senior Citizen Day (10% off for those over 60). I swear, every Senior in town shows up. It's our busiest day during a normal week. We usually call the first day of the month "National Link Day" (foodstamps) and normally we are busy the first week of the month. This month, tho, has been slow. All month. Until Monday. Monday, we had Link Card after Link Card. And then yesterday-- lots of Seniors-- busy, busy. My theory? They all were sure they were going to be raptured, so they have only been buying food as they needed it the last few weeks. Why spend money on food you aren't going to need, after all! But since nothing happened, they all had to come in and stock back up! Again, just a theory.
Posted by Sadie J at 6:00 AM No comments:


When I was in High School my friends and I listened to WLS out of Chicago. It was an AM station-I'm really surprised it came in this far south. But every morning, as we got ready for school, we listened to Animal Stories with "Uncle Lar" Larry Lujack and "Little Tommy", Tommy Edwards. It was usually one of the first topics we discussed once we got to school. WLS was a top 40 radio station and to this day my favorite music is late 70's and early 80's top 40. I loved the whole crew, even the news crew. I still know, 30 years later, that LGBB means "Les Grobstein, Bubble Butt", something Larry came up with one morning. (My husband and I are convince that WKRP in Cincinnati was modelled after WLS!) Soon after we graduated, the programming at WLS began to change, and it was never as good. I began to listen to a station out of Terre Haute that played "harder" Rock and when I dialed back to 89, it just wasn't the same. One day, several years later, I dialed it in to find that it is now talk radio. Humph. Ah, but the memories are still there! And now, thanks to YouTube, so are some of the clips!
Posted by Sadie J at 7:19 AM No comments:

Google Chrome: It Gets Better


I taped Glee the other night and while I was watching it the next morning this commercial came on and by the time it was over I realized I was crying. I still tear up each time I watch it. I became interested in Gay rights during college. I'm not sure why, except that a cousin of mine died of AIDS. I barely knew him, but he and my Mom had been close when they were younger. He had been living in Chicago and suddenly just fell off the map. No one knew where he had gone and Mom figured he had gotten mixed up with the wrong people and was dead. One day, out of the blue, he called Mom and said he was living in California. Soon after, he reconnected with his sisters. He never said he had AIDS, but it was the mid 80's and we suspected. He didn't want anyone to come see him. It made my Mom sad, and therefore, it made me sad. And I started paying more attention to what was going on around me. Now I read about these teen suicides and wonder what can be done. Bullies are bullies, whether you are talking about a 13 year-old or a 30 year-old. I believe it's learned behaviour and you aren't going to talk them into changing. The schools have assemblies to "address the problem" but I have little confidence that they accomplish much. I realize it's supposed to be a commercial for Chrome, but if it gets the message out to a few young people and helps them hold on, helps connect them to It Gets Better, then yeah for Chrome!
Posted by Sadie J at 1:03 PM 1 comment:


I'm four years older than my brother and we didn't have alot in common growing up, so we didn't always get along very well. But once we both hit our teens we began to bond. I've always figured it was because we were both doing things we didn't want the parents to know and we had the option to get along or constantly keep each other in trouble! Even if it wasn't the best reason in the world, it worked and we finally got close. One of my favorite memories of those years is sitting on the lower part of his bunk bed while he practiced his guitar. We would talk and sing. I really miss it sometimes. This version of Fleetwood Mac's "Never Going Back Again" blew me away. Listen to the guitars towards the end of the song. Amazing!
Posted by Sadie J at 6:45 PM No comments: