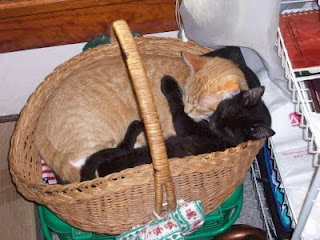 It's been a mad, crazy summer!  Since the husband wasn't working last year, I didn't get a chance to do any traveling.  I guess I've made up for it this summer--I've logged over 6000 miles, going here and there!  In between all of my traveling, my husband decided Roscoe needed a friend--that he was going to get fat and lazy since he turned a year old and didn't romp like a kitten anymore.  He kept saying that we needed to get another kitten.  I was very undecided about it.  I saw the reasoning behind it, but we already have two 13 year old cats plus Roscoe, did I really want the mess another pet brings with it?  But he convinced me.  A girl I work with had a new litter and I told her I would take one when they were weaned.  She brought me updates and pictures, we picked out a name.  And then a week before we were going to bring her home, the kitten died.  The whole litter, actually.  They think maybe the mother got into poison and passed it on to the kittens.  The local vet mentioned she had some strays so we decided to take one.  Meet Jinx.  He's 4 months old.  He was almost dead when the vet got him, but she nursed him and he survived.  He's lively, cuddley and he and Roscoe bonded immediately, which, of course, was the whole point of the thing!  Now we are a 4-cat family--it's going to make me crazy!  I think the Christmas tree is in trouble!