"If My Son Were Gay"

All In A Day's Work

Customer swipes debit card.
Me: I'm sorry, but it comes up insufficient funds.
Customer: That's strange. There should be enough in the account. Should I swipe it again?
Me: Only if you think something has changed in the last 30 seconds. 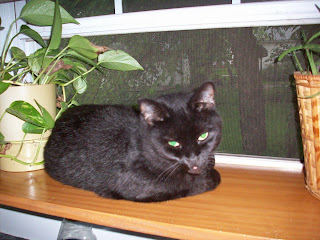 The cats have all been spending the majority of their time outside, but it's been raining all morning and they have all decided it's just too damp for any respectable cat to tolerate. So they are tucked into corners through out the house!
Posted by Sadie J at 12:18 PM 2 comments: 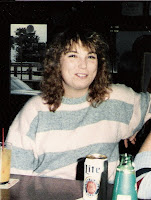 I don't know if I'm going through the fabled "mid-life" crisis, or I'm just going a bit mental, but I've not been happy with my life the way it has been the last few years and I waver between totally separating myself from the situation or just making small changes. It seems the small changes are winning, and I find that the "small changes" reflect my much younger self to an extent. The weight loss for one (I've lost 25 pounds! It's amazing how much better I feel!), I'm drawing again, I'm listening to (new to me) music, I'm getting out with my friends occasionally, doing some funky things with my clothes, hair, nail enamel and makeup. And seriously considering changing my name. Not drastically. Just the spelling, really. I mentioned in a past post that people call me Sara, which isn't my name. My first name is actually Sara'Ann, but people can't seem to comprehend that Ann isn't my middle name. My Mom really didn't know what she was doing to me when she named me this. The problems I have had my whole life. She definitely couldn't have foreseen this computerized world we live in. Computers don't like my name. Sometimes I type it and hit enter and it comes up Sara#@&Ann, which is cartoon-speak for SaraDamnFuckingBitchAnn! What I would like to change it to is simply Saran. In fact, to a small amount, I've started using it.  I advise pregnant women, if the subject comes up, to not give their child a strange name or use a strange spelling. It will follow them for the rest of their life. The funny thing, going back to my younger self--there was a time when I had a bit of a split personality, for a period between my late teens and mid twenties. There was the sweet, nice, respectable girl named Sara'Ann and then there was the party girl who was into sex, drugs and rock-n-roll. She was Sara. And I could switch off between the two in an instant. I had two circles of people in my life and the people who knew one personality wouldn't have recognized the other. When I was in one personality I didn't like being called by the other name. I suppose it's a bit like someone calling you by your sibling's name. When I started this blog I was in a rather dark place and my goal was to only put in things I found positive in my life, just to remind myself that there was positive things, I just wasn't seeing them. I don't know what's going to happen in the next year, but I'm setting myself some new goals, giving myself a new name, and considering it a new start!

(The picture, altho not the one I wanted 'cos I can't find it, is Sara. You can tell because of all the liquor on the table!)
Posted by Sadie J at 9:06 AM 1 comment: