Raybeard wrote a post about the removal of Gone with the Wind from HBO Max. I’m not going to repeat what he wrote. Here’s the link if you would like to read it. I’m not even going to comment on the movie because honestly, I’ve never watched it. Nor have I read the book. I have no interest in them. But it did get me to thinking.
For context: I hit my teens in the late 70s. I grew up in an all-white area in the USA mid-west Bible Belt. I was a typical kid. I drank a little, I smoked occasionally, I had a great group of friends. We “cruised” on Friday and Saturday nights, bowled, played arcade games, and went to the movie theater. Although I considered myself to be the "hippy" of the group, interested in the women's movement and civil rights, I'm not sure my awareness of the wider world came until college. (I'm pretty sure it wasn't until college that I added gay rights to that list, simply because I didn't know.)
Fast forward to 2020. About two and a half months ago we fired up the VHS player and started rewatching some old Dr. Who we had. And then we dug through our collection and continued watching these old movies that we thought were brilliant back in the 80s and 90s. Alien and The Thing and . And two weeks ago, we dug out some teen movies from the 80s. Valley Girl, Sweet Sixteen, and Fast Times at Ridgemont High. There were parts I still thought were funny, but oh, my, have they not aged well.

Would I recommend them to a young person today? Not unless they asked specifically for an example of something problematic. But I think they’re important for that very reason. The things I didn’t notice when I was 20 that jump out at me now show me that I’ve grown, that I’ve paid attention and become a better person. And some movies, like Gone with the Wind, show a snapshot of our history. We need to have that, something tangible that we can judge ourselves on. It’s one thing for me to tell my kids and the young people I work with “this is how it was when I was your age” but it’s another for them to see it, to hopefully learn something about my generation from it. If nothing else, it’s a place to start a discussion.
One thing that surprised me as we’ve been doing our nostalgia viewing—WKRP in actually held up pretty well. There are a few episodes that weren’t so great, but it’s amazing how many issues that were featured on that show are relevant once again. If anyone doesn’t believe the current administration hasn’t pushed us back decades, I think the proof is in the viewing!
Posted by Sadie J at 9:28 AM 1 comment:

While The World Burns... 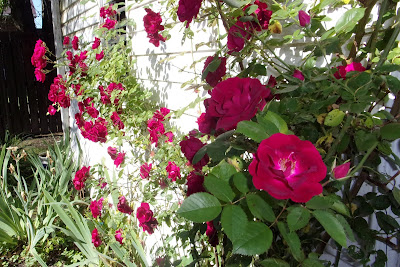 I went for a walk yesterday because I realized I hadn't taken so much as a step ouside our yard in a week--haven't even wanted to. If I didn't occasionally need to go to the store or the bank, I could happily never leave the property. I hope this fades, especially when  the time comes for me to go back to work. Except, there's this little voice that keeps whispering "if you go back to work". Which, unless some rich relative I don't know about dies and leaves me money, isn't possible. This leave-of-absence really is meant to be a temporary thing. Last week I went into the grocery store where I've worked for 22 years and was surprised by how much I missed it. And for about ten minutes I considered going back part time. But... I have no filter. The boss would have to fire me within the first week. So, I guess I'll stay home a tad longer and watch my roses bloom.