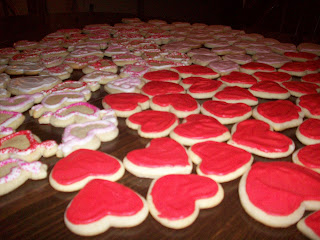 Valentine's Day has never been a big deal around here, not because I didn't want to but because my husband isn't particularly romantic and finds it all a bit silly. I guess after 20 years I know not to expect anything. So I was a bit surprised when he actually suggested we go out to eat today! I think it's just because this is the first Saturday he hasn't had to work since he started his new job in December! I'm not picky--I'll take him up on it!
I got told at work they expected cookies, so they got cookies!
Posted by Sadie J at 10:40 AM No comments: 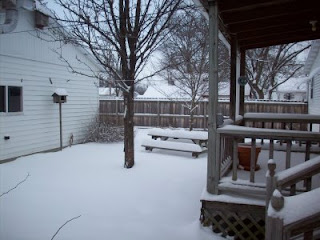 We seemed to get some good snows when I was a kid. In fact, my High School Graduation was held two weeks later then normal because we had so much snow that year that we missed about 3 weeks of school. My kids have never seen a winter like we saw in the 70's and early 80's. In fact, I just realized recently that they have never been sledding. How sad! Well, last week they got a little taste of it. I believe this is the most snow we've had since we moved to this house, and that will be 10 years come September. It's true that 10 years ago during the first of January we got a good amount, but that was also with freezing rain on top of it. Not good to play in. Unfortunately, both kids are old enough now it was more of an inconvenience (trying to dig the car out!) than it was fun. But the school called two snow days, so my son thought it was a wonderful thing!
Posted by Sadie J at 5:12 PM No comments: