I'm Such a Socialist! 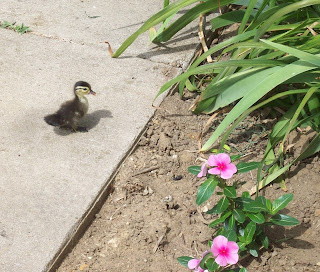 I was sitting outside last Saturday morning with my niece having a yard sale when out of the corner of my eye I see a little bird.  Nothing unusual about that, there are birds everywhere.  But then I heard the cheeping and realized it was a duckling.  Then there was a second one! Hilarity soon ensued as the two of us chased the little things down and caught them.  Nobody ever told me ducklings are so fast!  We discovered that the neighbor boys were trying to catch one running around behind the house.  (We never caught that one)  They told us one of the cats had killed two before they knew they were there.  We never saw an adult duck so who knows were they came from.  I wish I had a good ending, but they died before we could get them set up with a pen. Since it was Saturday, I couldn't get ahold of the vet to see what she suggested and the feed shop didn't open until Monday.  We lost the first one Sunday morning, but the other seemed to be doing well.  Monday I bought chick feed and it was eating and drinking.  Plus, I had set up a little place for him in the yard so he could be in the grass, but I put him back in the cat carrier and brought him in for the night and he died early Tuesday morning.  I know wild things are hard to keep alive in captivity, especially if you have no clue what to do, but it made us all a little sad.
Posted by Sadie J at 4:54 AM 1 comment:

Usually my "fan girl" obsessions are male oriented, but I think Felicia Day is hilarious!
Posted by Sadie J at 4:21 PM No comments: 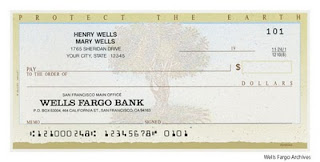 I hate check writers. So many people can't talk and write at the same time.  So they talk and  obliviously swing the ink pen around while more people are lining up behind them.  Write the damn check!!!  Better yet, sign your name and hand it to me.  We have a check printer--it takes about 2 seconds.  Maybe it's because of my advancing age, but I have no patience anymore.  It's like the old Visa commercials where everything comes to a stop when  someone pulls out a checkbook. Anyway, that's how my day is going.  How is your's?
Posted by Sadie J at 1:05 PM 1 comment: 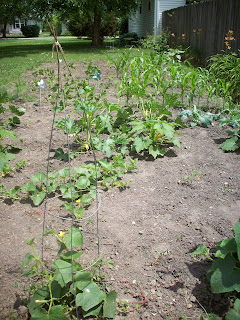 I had to replant some tomatoes and I've planted some okra in the last week but everything else seems to be chugging right along.  I've picked several cucumbers and a zucchini and a yellow squash, and we may be eating green beans in a week, two at most!  Last year I planted everything to close together, fulling expecting half of it not surviving (like the year before), so I've learned my lesson.  Everything is planted far enough apart that I can get in between and hoe.  Now, if I could just keep the cats out.  I don't mind them using it as a litter box so much as the simple fact they have dug up and/or rolled around on several plants.  (Hence, the replanting of tomatoes.)
Posted by Sadie J at 5:55 AM 1 comment: