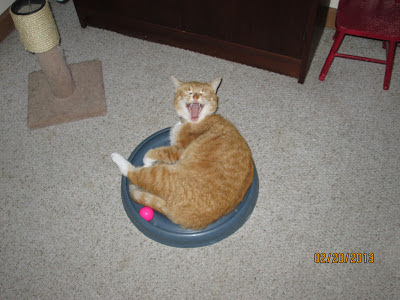 Roscoe isn't a "player" in the sense that he doesn't play with toys. But Jessie was laying in the spot he wanted, so he went and took her favorite toy. And then he laughed about it!
Posted by Sadie J at 3:25 PM 2 comments: 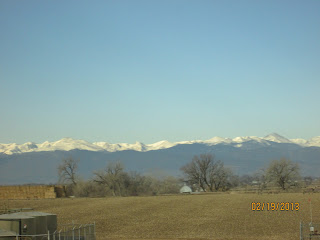 We made it home Wednesday afternoon, a day ahead of schedule. The original plan was to spend the day in Denver at the hospital because both my brother and sister-in-law needed to go into work for awhile, so we were going to take the shift. But. My niece had a bad night Monday and into Tuesday morning, so tests were ordered and my sister-in-law called and told work she wouldn't be there. We spent the morning at the hospital, but with the weather reports coming in, we decided it might be best to head home. It was hard on Mom. I know she wanted to stay. But she has back trouble and this trip was not kind to her. My niece's recovery is going to be long--there is no way Mom could stay the whole time. Maybe 10 years ago, but her health just isn't up to it anymore. There have been times in the past when they were going through rough times and Mom went and stayed and helped around the house and took care of the other kids, but she just can't, anymore. The spirit is willing, but the body just can't do it. It hurts to see her like this. She was always so strong and active. I almost think it's harder for my brother to see her like this because he only sees her once or twice a year, whereas I have seen her gradually going down-hill.

Anyway, the whole point of this, before I got off track, was that we left just a few hours ahead of "Winter Storm Q". We stopped for the night in the middle of Kansas, got up early (with some nudging from me) and got back on the road. If we had stuck to our original plan to leave Wednesday we would probably just be getting started. As much as I wanted to be there, it's good to be home!

We arrived in Denver safe and sound Thursday around noon. We drove through snow flurries for the last hour or so. We spent the afternoon at the hospital with my niece and brother. Then came on up to Cheyenne in the evening. The doctors think they have (most of) her symptoms diagnosed, but she still has a long road to recovery. She appears to be full of infection, therefore they can't do some of the tests that they would like until the infection clears up. Then more decisions have to be made about her treatment. We are staying here at the house, doing a few things. I'm not sure how much help we are. My brother and sister-in-law take turns driving back and forth to the hospital to stay with her. They both have to work Tuesday so we are going to go stay with her that day. At this moment, my step-dad is planning on heading back home on Wednesday and I will probably go with him. Mom is torn. She would like to stay, but she can't get around very well-she has her own health problems. I wish I was in the position to stay, but we can't really afford for me to miss more work than that.  I have been able to spend some time with my youngest niece (she's almost 16), which I really enjoy. I do find I miss the girls but my brother was career military and has always lived away. I just have to tell them I love them at every opportunity.
Posted by Sadie J at 8:15 PM 1 comment:

On The Road Again

My niece is ill, very ill. She was born with Spina Bifida and has had a host of other medical problems in her 22 years. She is in a hospital in Denver, which is about 90 miles from where they live. Yesterday my brother asked us to come out and help--they still have one daughter in High School, which means lots of running. I think maybe he just wants his family with him. So we are leaving first thing Wednesday morning, which gives me just two days to get everything taken care of and get packed. Plus, I came to the realization this morning that I have no cold-weather gear, and it's cold in Cheyenne! Oh, well. Family is family!
Posted by Sadie J at 5:56 AM 2 comments: 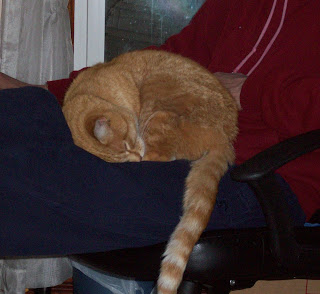 Roscoe, our resident wanderer, wanted out 2 1/2 weeks ago and didn't come back. He has disappeared on us before, but never for more than a week. We were having frigidly cold weather at the time and we've had a few small snows, nothing that was worth measuring, but enough that I would think any creature of intelligence would want to be in and warm. We hoped, because he is such a friendly cat, that someone had taken him in. But he is wearing a collar, so we feared the worse. We got up this morning and there he sat in the hall-way in front of our son's door. He must have showed up after we went to bed. I'm surprised he didn't come in and jump on our bed. He has followed us around all morning, "talking". I'm sure he has been telling us his story. Wish I understood feline. Now he is sacked out on the husband's lap. He's a bit thinner, but otherwise seems no worse for the wear. After a week of bad news, this is quite welcome!
Posted by Sadie J at 9:03 AM 1 comment: