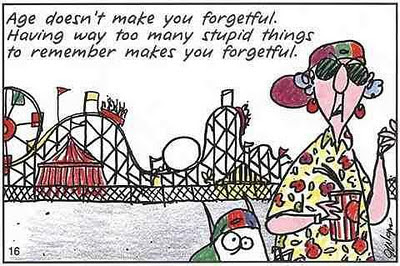 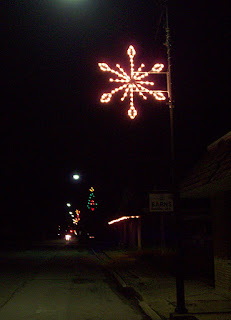 I was trying to take some pictures of the Christmas lights on Main Street to post on Life in Altamont this morning at a little after 6 o'clock. I parked my truck in what is considered a parking spot uptown and stood on the dashboard to take the picture. I heard a car pull up next to me and I didn't even have to turn around and look to know that one of our local policemen was "investigating" what I was up to. Really? You couldn't see I had a camera? I have to wonder where the local cops are while our soda machines at the grocery store are getting broken into!
Posted by Sadie J at 12:45 PM 1 comment:


Tuesday a woman came in the store and asked if we sold red Solo cups. "No", I told her, "but we have red Hytop cups". (Our store brand). She looked at them and said, "I'm not sure these will work", and she left. I found it a bit strange. Then, Tuesday night as I watched Glee, much to my surprise, they performed a song called "Red Solo Cup", and I went, "ah, I get it!". Now, I don't listen to country music, but in my younger days we would have "keggers" and of course, there were red Solo cups. Therefore, I was rather amused. Jump forward to Thursday. My brother, whom I haven't seen in over a year, was passing through on a business trip and I went "uptown" with him and a couple of his friends that evening. He does listen to country music, so I related this story to him and we all laughed about the song. One of his pals had never heard the song, so the other pal went and found it on the juke box. Everyone sang along. Then we heard it later on the radio. We ended the evening at an establishment that had a DJ, so pal # 2 went and requested it. I think I have now had my fill of the song.

Although, I'm sure I'll get it hear it plenty because it's the kind of song I see getting played at Redneck wedding receptions for the next few years!
Posted by Sadie J at 10:38 AM 1 comment:

When I first heard about this I couldn't believe Chic-fil-a was suing over such a stupid thing. I mean, come on, really? Do they really think people are so ignorant that they would confuse kale and chicken? I see the slogan and chicken doesn't even enter my mind. My second thought was that no small farmer was going to be able to fight big business. But now I think they have a chance. Yea, Governor Shumlin, for standing up for your people! It seems to me that things are getting ridiculous.
Posted by Sadie J at 4:50 AM 2 comments:

It doesn't feel like Christmas. I usually enjoy putting up the decorations and usually do it Thanksgiving weekend, but this year I can't seem to get into the mood. I know part of it is the fact that I think the cats are going to be a problem and some of my pieces are fragile. I think another part of my problem is that I am mad all of the time anymore. Work, politics, trying to figure out how to pay the bills. I'm not normally like this. And I've been trying to shake it off. But I guess some things just can't be shaken off! As far as the money thing goes I just have to hope I find a different job (not likely) or my husband gets more hours where he works (not looking likely, either). I wish I could think of a business we could start. I sell Avon and the hubby sells baseball cards on Ebay, but neither is profitable enough to help much. I'm mad about work. My son worked at the store where I work and a couple of weeks ago he quit. Things are such a mess there and things were said, things that had been building for a while. My son said some immature things, but he's still a kid. They say immature things. But he wouldn't have if the boss hadn't started it. Now my son feels bad about what happened and I really do blame the adult in the situation. He should have know better. So now I hurt for my son. I'm mad about the political situation. Last week my step-brother sent a joke e-mail. I guess I never realized we are on opposite sides of the political spectrum. I'm sure he found the joke hilarious, but it just pissed me off to no end. I started twice to respond to it, finally I just deleted it. Nasty words from me wouldn't have helped any thing. But there is so much that I keep quiet about just to keep peace within the family. And I'm finding it to be heavier and heavier to carry inside. And I miss my daughter. She'll be home in two weeks. Maybe by then I won't feel like crying all of the time. And then I can enjoy the Season. My rule was not to blog about the negative, but right now I'm just not feeling much positive. I think when we feel this heavy inside, it's hard to see the good things going on around us. My brother, who I haven't seen in over a year, is going to be here for a couple of nights at the end of the week (passing through for work) and I'm excited to see him. I guess I'll just try to hold on to that feeling for now!
Posted by Sadie J at 4:19 AM 1 comment: