Me: Schuetzenfest isn't what it used to be.
Daughter: Isn't it just a big drinking party.
Me: There used to be so much more to it.  They've taken out the "schuetzen".
Daughter: "Schuetzen"?
Me: Well, yah, they used to have a trap shoot, that was a big part of it when it first started.
Daughter: Oh, it was like our family get togethers! 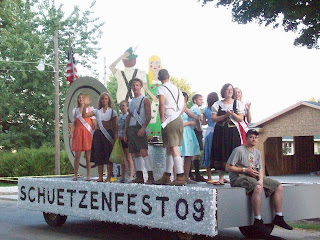 Friend:  Do you know where I can get a pair of lederhousen for my son--he's going to be in the parade.
Me:  Honey, it's just sad that we know what lederhousen are!
Schuetzenfest is a German heritage festival started in our small town in 1966.  By 1976 the crowd had grown to 50,000 people.  College kids would come in by bus loads.  For my 12 year-old self it was great, for the organizers it was a disaster.  That year was like Woodstock--complete with bad Acid!  Lots of arrests, big mess left to clean up afterwards.  The next year it was held in a secret location and only members were allowed to go.  It returned to the fairgrounds but it has never been the same.  Those of us that weren't of drinking age in '76 talk about it with nostalgia, wishing it had been like that in our late teens and 20's.  I used to have a good time, but I think it's dying a slow death.  I didn't even go this year--the bratwurst just isn't calling loud enough!
Posted by Sadie J at 6:30 PM No comments: