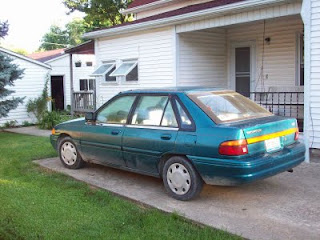 We have three vehicles--a 2005 Dodge Neon, a 1995 Ford Escort and a 1991 Chevy S-10. We bought the Neon in '06 when we were taking the kids to Walt Disney World and we figured the Escort was going to be a bit tight. We kept the other two vehicles because they were both paid for, ran well, and our oldest had just turned 16. She drove the Escort, which she named Rupert, through High School and for the two years she was going to school in Indianapolis. But now that she is in San Francisco, we don't have a need for 3 vehicles. The big Question of late has been, "which one do we get rid of?". My husband drives the Neon back and forth to work, and I drove Rupert during the winter after I hurt my foot and walking just wasn't an option. But my foot is (slightly) better and the weather is nice, so I've been walking to work. The truck is a "plain jane" that we bought new, off the lot. It only had 4 miles on it and my husband drove it back and forth to work for years. It's been a great truck for us, but it is a stick shift and doesn't have power steering. I have a hard time driving it. I realized two weeks ago that we really do need a truck. We don't need two cars. So altho I love our little Escort, it should be the one that goes. I made the decision, I hardened my heart. And ever since we have had trouble with the truck. I know, it's 20 years old. It was bound to happen. It may not be "big" trouble; it may be something that is easily, and inexpensively, fixed. I just need it to run for a couple more years! Am I really asking so much? (And will Rupert ever forgive me?)
Posted by Sadie J at 5:40 PM 1 comment: 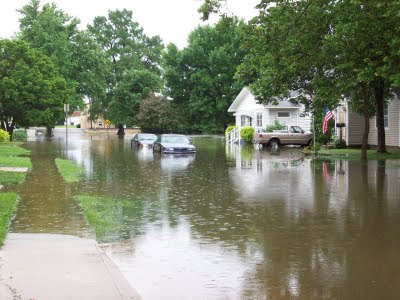 A few years ago we were in the middle of a drought. Now it won't stop raining. 'Nuff said.
Posted by Sadie J at 7:13 PM No comments:

I took my daughter to St. Louis Lambert Airport yesterday for her flight back to San Francisco. Of course, it rained the whole way. We left with plenty of time to spare because I haven't been to the airport for a very long time and I was afraid of getting lost. Plus, there is always the threat of road construction. It's almost a miracle to get to St. Louis without driving through miles of road construction. Anyway, like I said, it was raining. Hard. The closer we got to the Missouri boarder, the harder it rained. As we crossed the Mississippi River on 270 we passed a car that had spun around, was facing the wrong way and was blocking the right lane. I figured we were going to get smashed by a semi trying to get around, but we made it. We got to the airport on time (meaning 1 hour before her flight), but just barely. Because at times I was only driving 45 miles-per-hour. Did I mention it was raining--hard? We got her checked in at Arrivals, I gave her a hug, and headed back to 270. Miracle! It quit raining! Within two miles of the airport, I passed two more wrecks. And all I could think was "fools"! When it's raining so hard you can barely see out your windshield, slow down! I couldn't tell if there was any other cars involved, so I imagine they hydroplaned. Other people's driving makes me so nervous!
Posted by Sadie J at 5:19 AM 1 comment: 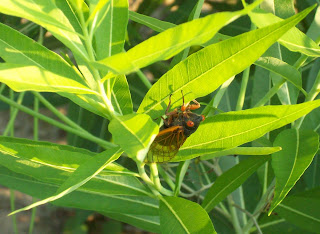 The 13-year cicadas have arrived! I think they're fascinating. While driving down the highway Saturday, they were so loud that I could hear them over my radio and air conditioner--with my windows closed. I imagine for the people that live in the country it's annoying. My daughter and I went out "bug hunting" and took pictures yesterday evening at the Nature Center. We could hear them everywhere, but at first I couldn't find any because they were all up in the tall trees. I couldn't even find any shells. But up by the building the bushes were covered with them! They have red eyes and orange wings, 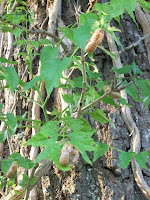 which distinguish them from the regular yearly cicadas that we will get later in the summer. After this crop of cicadas finish singing and mating in the next couple of weeks, we won't see them again until 2024. Since we couldn't find any shells, I figured that they had all gotten knocked off during the storm Sunday, but we found a tree that was covered with them. I just think it's too cool! 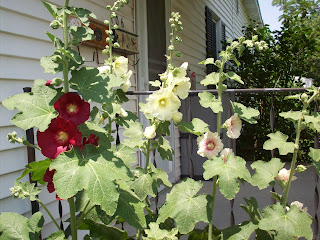 I just noticed the Hollyhocks bloomed! The mailman likes to walk up to the porch, reach over the railing and put the mail in the box. It drives the husband nuts! So I got some Hollyhock starts from my neighbor and planted them in the corner. Now the mailman has to walk up on the porch, at least in the summer. My neighbor has all different colors--white, yellow, burgundy and pale pink. Somehow, last year I ended up with all yellow. This year I've got several different colors! I do like a variety! They are very pretty and seem to be doing their job well!
Posted by Sadie J at 4:24 PM No comments: 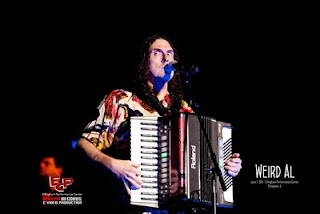 Weird Al performed at the Effingham Performance Center last night and I had tickets! It was so worth the money we really don't have right now! It was an amazing, fun show. We had never been to the EPC before-- I think the tickets are a little pricey--but it's a nice place. I had been told there are no bad seats there and I would agree. Altho I purchased the "cheap" seats, we had a good view of the stage. I guess after 35 years of performing it's not surprising 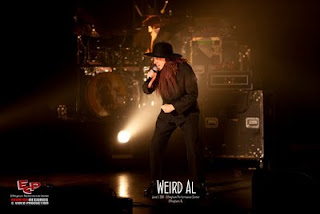 that he and his group can put on a tight show. The show was so well put together that the audience was never left hanging while the band was changing costumes. And there were lots of costumes! I think that's part of the fun! Weird Al has a new album coming out in about 3 weeks and he covered quite a few of his new songs, but there was plenty of his older hits, too. I've been a fan since my High School days, the early MTV days! I would definitely go see him again! 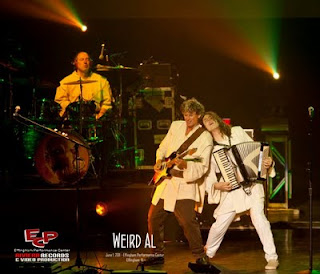 Credit where credit is due. The photos are not mine since no cameras were allowed during the show. The photos belong to the EPC.
Posted by Sadie J at 7:15 PM No comments: