The video is a bit weird, but love the song! We went and saw Fright Night Saturday. I wasn't really interested in seeing it until my son pointed out that David Tennant was in it. He's my current Celebrity Obsession at the moment, so I had to go see it. And I'm glad we did--it was entertaining in a campy sort of way. I'd go see it again if someone else would pay for it! Anyway, this is the song from the credits. It so fit the mood of the movie.

The Pirates! Band of Misfits Teaser


Because, who doesn't love Pirates! 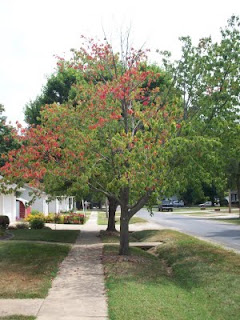 I walk by this little tree every day on my way to work. Every Fall it turns really red and pretty. This year, like so many other trees (especially small ones) the leaves turned early and fell off, or just simply fell off. The heat and lack of rain really hurt them. It seems to be a trend the last few years, we get too much rain for a couple of months, then it just stops. So here I am, watching Hurricane Irene hit the East Coast and wishing some of that rain blows over here! The grass is more or less dead, and I'm really babying what I have left in my garden! The corn and bean crops, that looked so promising six weeks ago, aren't promising any more. Even us non-farmers are affected, just because our whole community is financed by how the season ends. It may be a lean Winter.
Posted by Sadie J at 7:32 AM 2 comments: 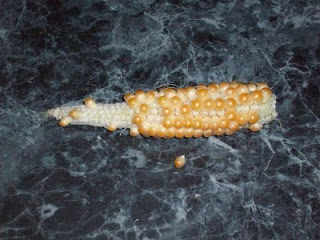 I mentioned earlier that I grew popcorn from a kernel of bagged popcorn. Well, this is the little ear that resulted from that experiment. We haven't popped it yet, but I'm thinking it's going to happen this weekend! It won't be a big bowl of corn, but at least I can say I grew it myself! And maybe next year I'll try planting a bit more!
Posted by Sadie J at 7:37 AM 1 comment: 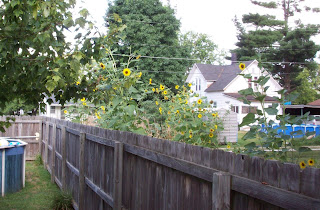 The first year I planted a garden after we moved to this house, some 10 or 11 years ago, I planted large sunflowers at the edge of my garden. They grew beautifully! I always leave the sunflowers in the garden at the end of the season so the birds can feed on them through the winter. And each summer they reseeded themselves. The first few years I still had large sunflowers, altho each year they grew a bit smaller. Then, about 4 years ago, this happened! They are more like sunflower "bushes" or "trees". Lots of little sunflowers. I love them! And so do the birds. This summer we could float in the pool and watch the hummingbirds buzz around. There were cardinals and one day some little yellow birds, maybe goldfinches. Two years ago because of all of the rain, I didn't even try to put out the garden. But the sunflowers grew. I'll always let the sunflowers grow!
Posted by Sadie J at 6:20 AM 2 comments: 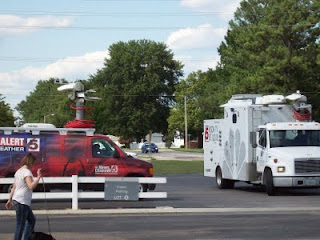 Did I say in my last post that everything seems to happen at once? Oh, if I had only known....

I hauled my items to the Fair Friday evening and met the people I was going to be spending time with. It was really hot, but I enjoyed myself. Each day it got a little cooler until it actually became pleasant. My sales weren't what I wanted (in fact I lost money) but I enjoyed being on the Fair Grounds each evening and visiting with people. Then Wednesday night, after I had gotten home and had been asleep for an hour my Step-Dad called to say my Mom had fallen while untangling the dog's chain and he was taking her to the hospital. I got dressed and headed over. I got there about 11:45 and nothing had been done. And not much got done until after 2:30. The staff were all very nice, but there was only one ER doctor and things didn't move along at the pace I thought it should! They did X-Rays at midnight but didn't give her any pain meds until 3 a.m. She had to have 6 stitches in her head and she had a dislocated shoulder that they couldn't get back into place. They decided to admit her until a surgeon could look at her. At that point, almost 4 o'clock, I headed home so that my husband could have the car to go to work and I could get some sleep and make some phone calls for Mom. I guess right after I left, all hell broke loose! (I always miss all of the fun!) Miranda Cosgrove's bus was involved in an accident on the Interstate and they brought her, her mom and a few more of the injured into the hospital where Mom was. Mom said she heard the ambulances and there suddenly seemed to be alot of people, but she was out of it and didn't know what was going on. Now, I might add, even if I had still been there, I wouldn't have had a clue who she was. I waited on Reba McEntire once and had no idea who she was, but since everyone else was getting her autograph, I did too! Anyway, I went back at 10 o'clock, they were able to get Mom's arm back in the socket without surgery, and we took her home at 4:30. I wouldn't have known anything was going on except there was a girl that used to live in our neighborhood when I was a kid who was going room to room looking for Miss Cosgrove or her Mother because she had seen it on Facebook. And when I left I saw the Channel 5 News TV trucks in the parking lot. I heard there was more TV stations there later. To complicate my Wednesday, my daughter flew in Wednesday and her plane got diverted to Phoenix. We don't know why, but it was just another worry for the day. She spent the night in Indiana and then got a late start on Thursday and didn't get home until the evening. Friday we had the kids' oral surgery. It's so hard seeing your kids in pain! The good thing about doing it at the same time--they keep comparing pain and swelling! Yesterday, Saturday, was the final day of the Fair and I spent most of my day out there. I packed up and got home around 8 o'clock. If I set up a stand at the Fair again, I'll do it differently. I'm just glad the week is over!

Going to the Fair!

The County Fair starts today and runs through next Saturday, the 13th. I was asked to share a booth with two other people that wanted to split the rent three ways. I haven't done the Fair for several years and since I want to build my online business, I thought I would do it. So after I agreed and paid my part, my daughter called and said she would be flying in on the 10th, and could I make her a dentist appointment to get her wisdom teeth out--they are bothering her. So I made the appointment, and it's on the 12th. So starting today, I am getting off work at 4 p.m., heading to the Fair Grounds and sitting out there probably until 9p.m. Her roommate is coming home with her, so I won't have to take off a day to go pick her up, but I'm still taking a day off for the surgery. While I was at it, I made the appointment for both kids--the son needs his out, too. And he doesn't want to wait because he doesn't want his wisdom teeth to shove his other teeth up "like yours did, Mom". Okay, he has a point! (What's wrong with buck teeth, anyway? It runs in the family!) Anyway, it's going to be a long week. Why does everything happen at once? On the up side, it seems to have cooled down a tad. Every year for the Fair, it seems to rain or it's so hot a person can't breath. I would prefer a little rain since I'm going to be sitting where there is no air conditioner!
Posted by Sadie J at 4:37 AM 1 comment:

I Want to Come Back as a House Cat!


The language is bad, so if you are easily offended, don't watch this. But it just proves the point, if there is such a thing as reincarnation, I want to come back as a pampered house cat!
Posted by Sadie J at 12:53 PM 1 comment: